10th Circuit Court Shreds Our US Constitution Regarding Voting 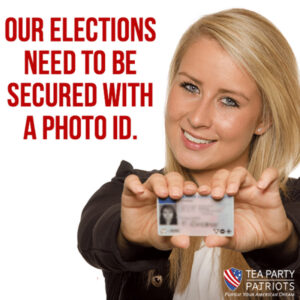 In Kansas, the Secretary of State was attempting to uphold the law requiring proof of citizenship before registering to vote. The League of Women Voters and the American Civil Liberties Union challenged said law in court.

It seems idiotic that there has to be a law to ensure that only those who have the right to vote are, in fact, those who do vote.

Who has the right to vote?

The phrase The right of citizens of the United States to vote appears in four Amendments.

Yes, our U.S. Constitution, which is the Supreme Law of the Land, clearly states that only U.S. Citizens may vote in elections held in these United States.

Amendment Fourteen Section 1: The right of citizens of the United States to vote shall not be denied or abridged by the United States or by any State on account of race, color, or previous condition of servitude. 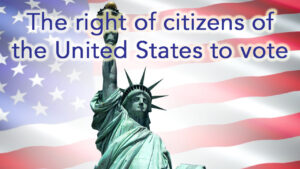 Amendment Twenty-Six Section 1: The right of citizens of the United States, who are eighteen years of age or older, to vote shall not be denied or abridged by the United States or by any State on account of age.

Regardless of what the above Amendments state, the 10th Circuit U.S. Court of Appeals (Kansas) agreed with a federal district court that proof of citizenship as a requirement to vote “unconstitutionally burdens the right to vote.”

Note that phrase: unconstitutionally burdens the right to vote.

They cited that over 31,000 residents of the state could not register to vote due to this law.

Notice they did not say Citizens. They said residents.

There could be a big difference.

Take away the politically charged emotion, take away the fact that we know there are millions of illegal immigrants residing in our many states, forget that and more.

Simply ask this question, how can it be a "burden" when ID is required just to be able to live?

There are scores of mandatory ID requirements, such as opening a checking account, buying liquor or tobacco products, renting or buying a home, getting married, boarding an airplane, renting a hotel room, buying or renting a car, ad infinitum. The list goes on and on.

Does this mean those 31,000-plus residents don't own or rent a home, fly or drive anywhere, have a checking account, etc., etc.?

How do they live without an ID?

The 10th Circuit Court of Appeals proves beyond any doubt that there are elected and appointed officials who have no regard to uphold the Supreme Law of the Land and are forcing their own personal opinions, beliefs and agendas upon We the People.

Worse yet is for them to state something as horrifically stupid as the law “unconstitutionally burdens the right to vote.”

They actually wrote in their 84-page opinion: "the DPOC (documentary proof of citizenship) requirement is unconstitutional.” 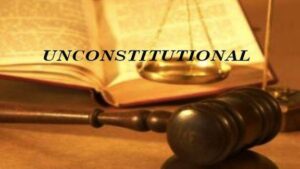 No, 10th Circuit Court of Appeals, you are unconstitutional and you should be tossed from the bench, barred from practicing law and denied any form of pension or benefits that would be paid for by We the People, the very people you have betrayed.

It is far past time to rid our incredible country of those individuals who do not uphold our U.S. Constitution or, who absolutely shred it in cases such as this one.

Our U.S. Constitution IS the only document ever written by and for a free people. But to remain free, We the People must demand adherence to our Supreme Law of the Land.

Arm yourself with knowledge of our U.S. Constitution!