There were 56 individuals who signed the Declaration of Independence.  There were thousands of others who put their lives on the line to ensure that the United States of America became established through the Revolutionary War and the adoption of the US Constitution and Bill of Rights. However, there is only one Benjamin Franklin. 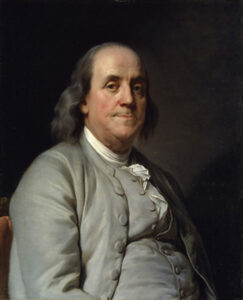 As one of the key Founding Fathers, Franklin did, indeed, sign both the Declaration and the US Constitution, but he did so much more.  He was one of the earliest proponents of colonial unity and earned the title of “The First American.”

He was a true renaissance man, with vast knowledge in many subject areas, and one who mastered several professions.  He was an author, a printer, politician, postmaster, scientist, inventor, civic activist, statesman and diplomat.

Born in Boston as one of 17 children, his thoughts about freedom began early in life.  At the age of 15, one of his brothers was jailed for publishing words against the governor.  Young Benjamin, who had been writing for the paper as Silence Dogood, a middle-aged widow, took over his brother’s newspaper and had Dogood proclaim,  "Without freedom of thought there can be no such thing as wisdom and no such thing as public liberty without freedom of speech."

Never one to be silent or mince words on the subject, Franklin said, on November 17, 1737,  “Freedom of speech is a principal pillar of a free government; when this support is taken away, the constitution of a free society is dissolved, and tyranny is erected on its ruins.”

He also knew that government, in any form, is not perfect, but that a republic, set up as our Founding Fathers had done, could stand for a long length of time - depending on the people.  On April 17, 1787, Franklin wrote about the quality that the people must have for a republic to endure,  “…only a virtuous people are capable of freedom.  As nations become corrupt and vicious, they have more need of masters.”

He is one who lived his life true to his God and to the Republic of which he helped create.

He is one who is synonymous with freedom and liberty.