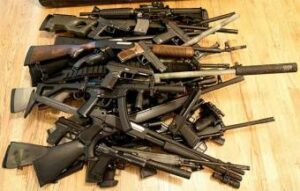 Alright, now that I have your attention, let’s talk about them.  Specifically guns and ownership, and more specifically how that applies to the U.S. Constitution.  For those that have not noticed or have not been paying attention to the news, the President’s Department of Justice recently made moves towards implementing a series of regulations that would… let’s say “hamper” a person’s chances at owning a firearm.  It’s a series of “more than a dozen” rules that disqualify people based on a fairly broad basis.

Constitutionally, this is not okay - to put it mildly.  The point of the Second Amendment is to allow people to form a militia to defend themselves, and if large chunks of individual people are unable to own guns because they fall under the vaguely defined guidelines, then the number of eligible Americans may dwindle significantly.

I realize that in theory the idea of not allowing anyone who could be potentially  dangerous to own a gun sounds good.  But do we really want to compromise the integrity of the Second Amendment?

-To our freedom and liberty,
Norm Novitsky and the In Search of Liberty Team

Thank you for taking the time to be a part of our journey as we continue to work toward enlightening and helping Americans with this highly entertaining, informative movie for people from all walks of life on the importance of the US Constitution, and what it means for our freedom, our way of life and our continued prosperity.  Learn more about our film In Search of Liberty.