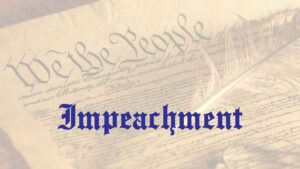 Unfortunately, much of what is being spread is far from the truth.

First, what is impeachment?

Clearly and simply stated it is an accusation or a set of charges brought against, in this case, a public official. No more. No less.

Here is the definition straight from Webster's 1828 American Dictionary of the English Language, which is how our Founders used the word because that is what it meant.

Impeach:
1. To hinder; to impede. This sense is found in our early writers.
2. To accuse; to charge with a crime or misdemeanor; but appropriately, to exhibit charges of maladministration against a public officer before a competent tribunal, that is, to send or put on, to load. The word is now restricted to accusations made by authority; as, to impeach a judge.
3. To accuse; to censure; to call in question; as, to impeach one's motives or conduct.
4. To call to account; to charge as answerable.

So what does being impeached mean?

Someone has been accused of something. Period. 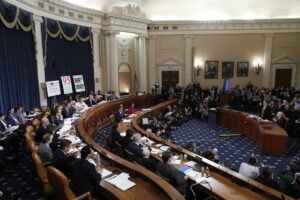 Thus, the House impeaches, in this case, President Trump, meaning they have accused him of something, are charging him with something.

It then goes to the Senate for a trial, with the Chief Justice presiding.

Showboating by Speaker of the House Nancy Pelosi trying to blackmail the Senate into giving her exactly laid out plans for the trial before turning over the articles of impeachment are not only absurd but unconstitutional.

As a side note, for her to demand that the Senate Majority Leader Mitch McConnell recuse himself from the trial is really stupid. Based on her line of thought, ANY Democrat who called for impeaching President Trump since he was elected (and there were many and they were loud), should have been recused from the House's impeachment hearings.

Anyone thinking that Pelosi withholding the articles of impeachment from the Senate means that President Trump is impeached forever is, sort of, half right. He is impeached.

Just the same as President Bill Clinton, who was impeached in 1998. That the Senate acquitted Clinton of the two charges  brought by the House in their articles of impeachment does NOT take away the fact that Clinton WAS impeached. He was. Again, forever. 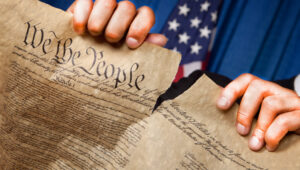 We won't go in to the fact that the impeachment process undertaken by this House of Representative body violated at least the 1st, 4th, 5th and 6th Amendments to our U.S. Constitution, the very document that each and every one of them swore an Oath to "support and defend." That will be another blog, another day.

Americans, and especially those who have been elected to represent us, must know our U.S. Constitution. What it says. What it means. And follow it.

As third President Thomas Jefferson said, “Educate and inform the whole mass of the people... They are the only sure reliance for the preservation of our liberty.”

This impeachment is clearly a case showing the need of vastly improved education about our Supreme Law of the Land.