In Search of Liberty Movie Chapters 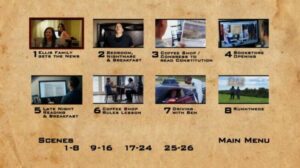 One of the unique attributes to our Educational Dramatic Comedy (EduDramedy) movie, In Search of Liberty, is the Chapter Menu.  While it does follow what would be called a fairly traditional format, it is designed to allow viewers to quickly return to very specific areas for a quick review of the subject matter.

For instance, if a family member wishes to go back and review the scene at "Runnymede," where some of the history of free people in the world is strikingly and artfully explained, one would simply click on Chapters and when it comes up, look for Runnymeade, which in this case is Chapter 8.

Likewise, if someone needed to go back and peruse what exactly is contained in Articles I, II & III in the United States Constitution, one would navigate to Chapters and locate 14 which is titled "Ben: Lesson on Articles I, II,  III." 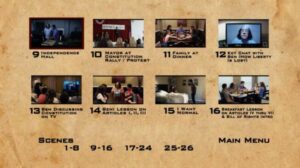 The whole idea and purpose of In Search of Liberty is to make it easy for people of all ages to visually learn more about our incredible U.S. Constitution, what it means to our freedom and liberty and what we can and must do to protect it.  In addition, it was created to be an easy-to-use learning tool for the whole family that may be refereed to again and again, as often as needed.