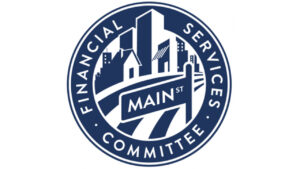 It is a wonder that Maxine Waters (D-CA) could even be considered to chair the Financial Services Committee.

The reason is simple.

She should not be in office. Period.

Maxine has incited protests and violence, if not riots. She has condoned her supporters burning the American flag outside her office (though, afterward, she did try to distance herself from that action).

These are just a couple of examples of how she has breached not only the House Professional Code of Conduct but, more seriously, she has violated her Oath of Office.

House Rule #23, Clause #1, states: “A Member, Delegate, Resident Commissioner, officer, or employee of the House shall conduct himself at all times in a manner that shall reflect creditably on the House.”

There have been more than a few times when Maxine’s words and actions do NOT “reflect creditably on the House.” 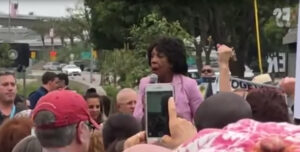 At one specific rally she yelled out to her supporters, “If you see anybody from that Cabinet in a restaurant, in a department store, at a gasoline station, you get out and you create a crowd and you push back on them! And you tell them that they are not welcome, anymore, anywhere.”

As for the flag burning. Yes, Old Glory was burned. She did nothing.

Hardly a role model to have represent American Citizens on Capitol Hill.

Unfortunately, as we have seen with the Congressional Accountability Act, members seem to take care of each other so perhaps she just got her hand slapped. More likely, nothing occurred.

But, what about her Oath of Office?

After every election all members swear this Oath: “I do solemnly swear (or affirm) that I will support and defend the Constitution of the United States against all enemies, foreign and domestic; that I will bear true faith and allegiance to the same…” 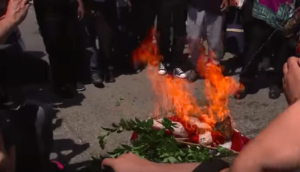 Her inflammatory speech and calls to harass Trump administration officials is exactly the opposite of asking people to “peaceably assemble,” which is protected by the First Amendment.

Thus the question, why is she still in office?

And, while she remains sitting comfortably in her office, don’t forget, she is a Socialist at heart.

Remember what she said to the oil companies: “Guess what this liberal would be all about? This liberal will be about socializing...uh, um...Would be about, basically, taking over, and the government running all of your companies.”

We the People really need to elect better representatives. And, with term limits and no retirement benefits.