The Above the Law, Double Standard of Politics 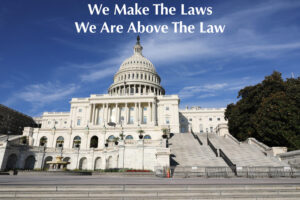 There have been far too many instances of a "public servant" (the position they actually occupy) who gets away with virtually anything, whether that comes from their buddies on Capitol Hill helping to cover it up or some other inane reason.

One of the most famous - and certainly a person who should have been held legally and criminally accountable - is Hillary Rodham Clinton.  Other, more common, people were sent to prison for far less than just her non-secure server and 30,000-plus emails she hid and lied about. That doesn't even take into account her treasonous inactions and lies regarding our soldiers, contractors and workers she left to die in Benghazi, on Sept 11, 2012, or stealing $190,000 worth of gifts and furnishings from the White House when Bill left office (though they supposedly returned them when it was discovered), or Uranium One, or pay-for-play, or Chinagate, or Whitewater, or Travelgate, and more.

But let's take a look at Capitol Hill and those elected officials who consider themselves above the law.

With the announcement of inappropriate behavior of long-sitting Michigan US Rep John Conyers the can of worms in DC may be coming undone, similar to what Hollywood has experienced since the public humiliation of movie mogul Harvey Weinstein.

There are affidavits stating that Conyers engaged in unwanted sexual behavior with female staff members numerous times.  Those activities included rubbing legs and backs and escalated to requesting sexual favors from his female staff.  He, of course, denies it.  But, there is also documentation that two years ago Conyers settled one sexual misconduct complaint for $27,000, essentially for the woman to keep quiet.

With that comes a HUGE problem.

That payoff was paid for by YOU and I.  We, the taxpayer, paid for that wrongful dismissal resulting from his sexual misconduct.

That is just plain WRONG!

However, that is just the beginning. 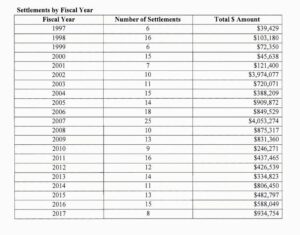 It appears that we, the taxpayers, have been shoveling out hush-money for years to ensure that the reputations of our public servants not be tarnished.

In the past two decades it is estimated that over $20 million in settlements has been paid out to dozens of people.  If these have anything to do with sexual overtones one must ask the question, why are they allowed to remain in office?

In the private sector we have recently seen several people ousted from their jobs because of allegations of sexual impropriety.

What makes those people on Capitol Hill, who are there to serve their public as lawmakers, so special.  That they make laws makes them above the law?

There is far too much corruption in Washington DC, on both sides of the aisle.

And we, the voters, the taxpayers, have allowed those in DC far too much lenience, coupled with granting them far too much power.  They truly do believe that they are above the law, that nothing can happen to them.

But, they are wrong.

If We the People rise up and demand morality and accountability from those we elect, if we enact what is done in the private sector in the public sector to those who violate the mores of the group, then we can truly make a difference.  We can weed out the "bad apples"  and get rid of them without ANY benefits - for failing to uphold their elected position in a lawful, ethical manner.

There is absolutely nothing in the U.S. Constitution, the Bill of Rights, nor any of the other 17 Amendments that place elected officials above U.S. citizens.  Yet, they are far above we average American citizens.

Why do we let it happen?

We, as the People, need to band together and get rid of the riffraff who perform illegal and immoral acts, but who are so blinded by their ego (or whatever) that they truly feel they "can do no wrong."

Let's find ALL of the skeletons in Washington DC and get rid of those who are hiding theirs.