“The Most Recent Shooting” 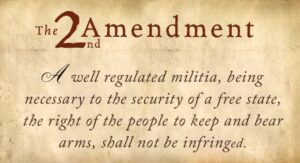 Another shooting.  I hate that I have to type out those words.  I hate that it’s a common enough occurrence that it doesn’t surprise me.  And I hate how the death of people leads others to take away freedoms.

People are scared.  I get it.  I understand it.  Guns are scary to a lot of people.  They are, after all, weapons.  Tools of force. But that’s all they are: tools.  It’s an old point—cliché even.  Never stopped being true though.  A gun on a table is only dangerous if someone picks it up with ill will.

But it’s easy to blame, isn’t it?  Just a little?  This thing that modern killers happen to have access to.  This connection between deaths.  Easy to blame the weapon.  Remarkably easy.  It’s almost comforting.  And again, I understand.  I wish it was that simple.  I wish I could blame the gun, and not the person.  I wish murders were not a sign of some deeper flaw in society.

But killers, and terrorists, and psychos will always have knives and poison and fire.  As long as we live in a world where people can be monsters, this sort of thing will happen.  And taking away the gun—the best defense the innocent has, will not stop this.  Police do what they can.  The military does what it can.  And they do a remarkable job of it.  But they can’t be everywhere at once.

Banning guns will not stop killings.  Criminals—people who do illegal things—are not deterred by making it unlawful to own a gun.  And if you or I found ourselves trapped with someone like that, I’d be glad if someone nearby owned a way to protect us, a way to fight back against people who have guns regardless of laws.

We live in a nation defined by our Constitution.  And there is a reason the Founding Fathers put the right to keep and bear arms as the second item on the list of rights.  Because it is that important.  It is a basic human right, I think, to not be made small by those who don’t care about human lives.