Where Will We Be in Ten Years Time?

What if we fail to restore faith and belief in the Constitution of America?

Is this a critical issue for the election of 2016?

Disturbing trends in recent years show us that unless we act to preserve our constitutional rights, we may, indeed lose our heritage. 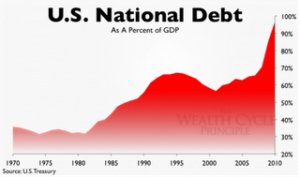 How did all this happen?

Sadly it has all happened with the agreement of Congress.

Yet these elected officials are mainly good people.

Could it be that Big Money is actually buying our politicians?

According to Stephen Moore who writes from Daily Bell from the Heritage Foundation, the crash of 2008 was caused by government policies and regulatory failure and it has yet to be fixed. The Fed, the White House, and Congress are once again creating the very same conditions for another financial bubble. Dodd-Frank is making the big banks bigger. We now have the same low down payment lending mania we had before 2008, with Obama repeating the Bush mistakes, and the FED refusing to tighten its stance.

Then there is the saturation of debt. When the crisis hit in 2008, the national debt stood at a little under $10 trillion and it has been increasing steadily ever since.

Have we learned nothing at all?

Quote for the week

About the Author: Lynn Verhoeff (Grandma Thunder) has been writing for twenty years. She has published two books, “Politics IOU” and “Magic Money,” both on Kindle.